Welcome to my Art and Lifestyle Blog. Follow my adventures as a Bohemian artist.

The Nyonya Garden Mural art at Gusto Cafe, Penang. My brief was to paint something that would teach these people how to respect nature.

Mr Koi represents all the koi fish that were brutally murdered by irresponsible parents who allowed their kids to throw liquid soap and ketchup in the pond at this cafe. The peonies represent the plants that were plucked from their pots while their parents watched and laughed.

“We want to enjoy our lives here without fear of being plucked by strangers ~ sincerely Mr Koi and Ms Daisy.”

I hope this artwork will inspire the parents to teach their children to respect and appreciate nature and the beauty around us.

Found this in my mailbox. Thank you Dan Brinsmead for this book! How did you know I’ve been looking for it!

Dan is an artist friend of mine. He’s seen me paint stewART the seagull and I’ve told him the story of stewART. I guess stewART also reminds him of Jonathan.

I’m just a little interested in seagulls. I am not obsessed. Really.

I have never read  Jonathan Livingston Seagull until today. I started hearing about him when I posted up stewART the seagull a few years back. It is uncanny that stewART and Jonathan are so alike! I am so happy to have discovered Jonathan. I love love this story.

The book is describes as “The most celebrated inspirational fable of our time” Jonathan Livingston Seagull shows us that we can soar if we follow our dreams!

Sketch of the day no 358: StewART the seagull street art mural at Gusto cafe, hillside, Penang, Malasyia by Penang based artist

StewART reappears at GUSTO cafe at hillside Penang…after he was kicked out of 75 Stewart Lane.

Stewart the seagull desperately needed a new home since he was abruptly evicted from the shop house he lived in George Town. Eviction is a common problem in the old town Unesco heritage zone. The motto these days is out with the old, and in with the new. Sad as it is, but life must move on…

So, after being sad for a while, I decided to bring Stewart the seagull back from the streets with some help from my friends Ru, Lily and her kids.

We asked Jason from Gusto cafe if he was ok with us painting at his cafe. He was more than delighted to host us as Gusto’s first art community. We arranged a time with him the following day (before he changed his mind) and painted Stewart the Seagull on his Wooden shutter.

It was a super fun collaboration.

Thank you Jason for letting us draw all over your wooden window.  🙂

Stay tuned to see where else StewART goes!! 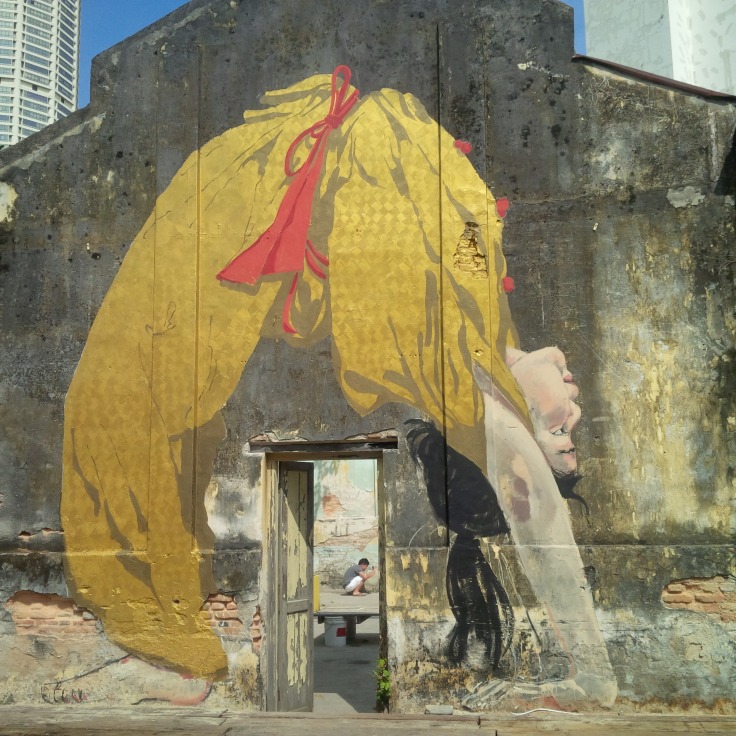 It’s hard to imagine that this is Ernest Zacharevic’s first solo exhibition. His facebook page has over 90,000 fans. At 27 years old, this Lithuanian lad has achieved iconic status in Malaysia and now internationally. The BBC referred to Ernest as Malaysia’s answer to Banksy.

It all started with one mural in Georgetown, Penang about 2 1/2 years ago. You can watch the time lapse video here of him painting the mural.

I first met him and his girlfriend Gabija about 2 years ago by accident. He had just finished painting that first mural. My first impression of them was that they were both brave, passionate, dynamic and incredibly talented. (and super nice) They were travelling the world and stumbled upon Penang and decided to stay. (My memory is hazy but I will go with this story ;p) I met them at the restaurant/art studio they set up in Georgetown. The following day I bumped into Ernest juggling on the streets. They basically just did what they loved and followed their passion. Soon after, he became an overnight success when George Town Festival commissioned 8 murals to be painted around Georgetown Unesco Heritage site. I never saw them again until yesterday at his first solo exhibition.

I went to the exhibition because I absolutely love his work. I didn’t expect him and Gabija to be manning the show. They were both there and the exhibition is not only fantastic but absolutely free. I asked him, are you selling your art work? He replied no. I mainly give it to my friends or my sponsors. The space is fabulous as well. It is an old bus company building. It is a derelict but beautiful space which they found and want to try to maintain before any developer comes to destroy it.

The exhibition is called art is rubbish/rubbish is art is because he has turned rubbish into art. He has turned a derelict building into an exhibition space, worthy of a second look.

If you have never heard of him, here are some of the paintings from the show and you can google more of his street art, which is how he became so popular. 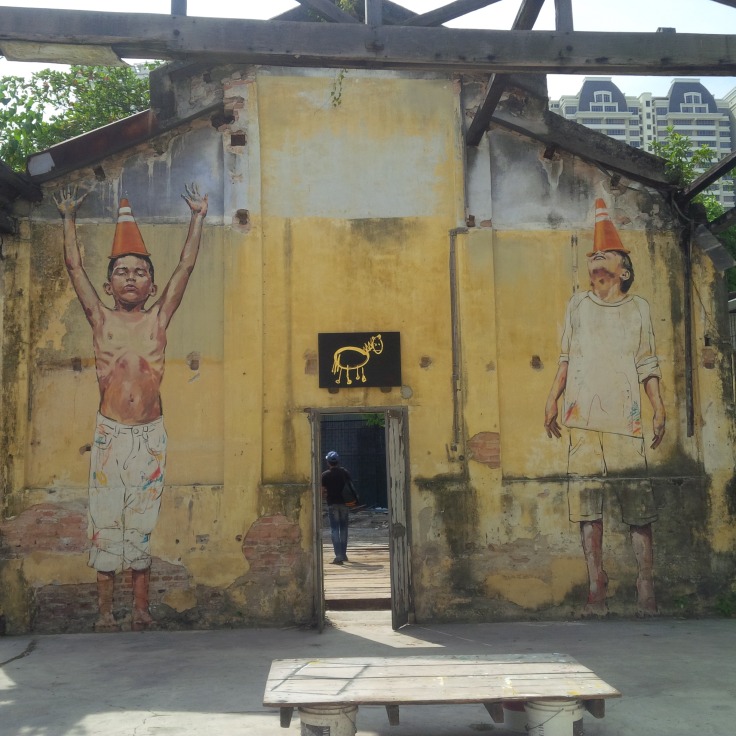 Finally the 3D lego woman and man. The lego figures are 3D replicas of a very controversial mural he recently painted in Johor, Malaysia. The authorities removed the mural after a few days because it highlighted the high crime rate in the country. He chose Lego man to depict the crime because there is a Legoland in Johor.

The story of the Stewart the seagull is to honour the birds lost at sea during a 3 week storm. They were caught out at sea and had no where to go but found shelter aboard a boat “Mind the Gap”. Stewart was the only one who stuck his neck out to make friends with the boat owners, chilling on their deck. He survived. Birds go through a lot of danger and obstacles and many lose their lives when they travel, still they do it. Their sense of determination and survival instincts is truly inspirational.